Social media censorship is akin to shutting down Napster 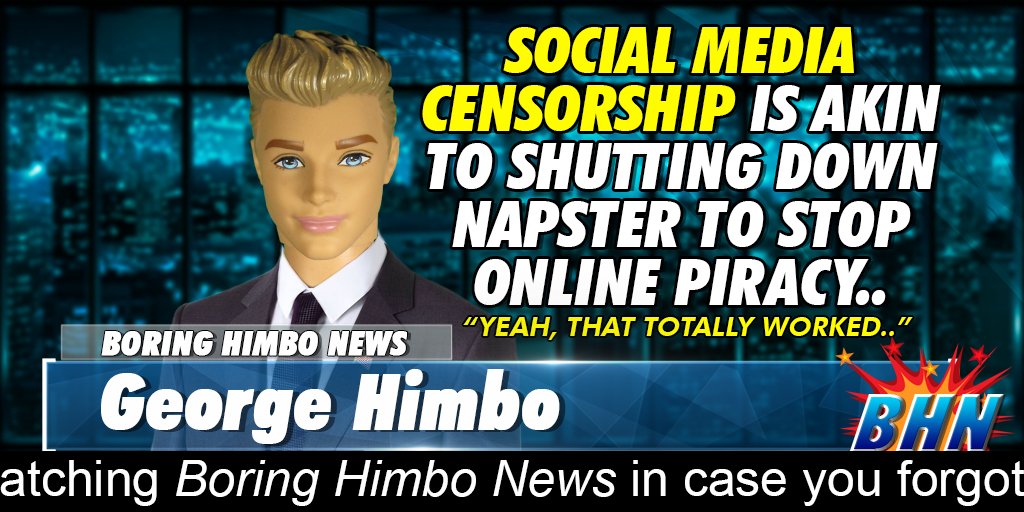 Social media censorship is akin to shutting down Napster.  What does that mean?  Let me take you back to the internet in 2001.  This was before Facebook, Twitter, Youtube.  They did not even exist at this stage.  Most people did not have their own websites either.  Although there were blogs, they were not as common back then.  If you created your own website back then, you actually had to know HTML programming.

In 2001, there was a file sharing program on the internet everyone heard about, it was called Napster.  The name Napster was part of our daily dialogue.  It was so common, it was the go to program for any music from around the world.

Napster allowed you share files through peer to peer network sharing.  It was a decentralized way of sharing mp3 files across the internet.  Napster only allowed you to share mp3 files, no other file formats.  That was fine, as everyone I knew at the time wanted to download music.  They either simply could not afford to buy the music CD or more likely could not buy the CD they wanted from the local music store.

The famous band Metallica was very upset by this.  Their music was being pirated and shared around the world through Napster, which is completely understandable.  They worked hard on their music and deserve financial compensation for their work.  It reached a point, where eventually, Napster was shut down as a result of a court order.

However, the problem was, everyone had experienced and really enjoyed the freedom of Napster file sharing.  The idea was out there and it was not going away.  Remember, an idea cannot be taken away or destroyed, it’s an idea.  With Napster shutdown, people searched for alternatives.

There were alternative programs on the internet and there were quite a few to choose from.  As far as the piracy was concerned, the problem with the new programs was they were not restricted to the MP3 file format.  They enabled sharing of any file type.  This is what led to the beginning of downloading pirated DVDs.  Piracy just got a whole lot worse for a whole new industry, the film industry.  I do believe the whole Napster situation is what eventually led to the creation of the Apple iTunes store.

To sum up the result of shutting down Napster; taking Napster away from the users forced them to find an alternative solution, which they found many to choose from.  Remember, you cannot destroy an idea.  The new alternative options provided more options than Napster.  The closing down of Napster did not stop piracy, it did the opposite and made it more widespread.  Napster was eventually revived, but by then it was too late.  People had moved on and Napster was no longer part of our daily dialogue.

The censorship currently taking place on social media is similar to the shutting down of Napster.  People just looked for alternatives and they found them to be better in the long run.  Alternative social media platforms do already exist and people like myself are flocking to them.  Users are clearly not getting the reach they once did when these platforms first started.

Social media platform owners need to take a look at what they currently have.  They are collecting huge amounts of money through very specific targeted advertising, which would be an absolute dream to those involved with traditional mainstream media advertising.  Ads which appeal directly to my interests and hobbies are much more effective than ads about things I have zero interest in.  That is the first great thing going for social media platform owners.  Censorship will hurt your advertising dollars.

All I can ask of the social media owners is that you not let the arrogance of control through censorship get in the way and destroy these wonderful platforms.  Keep in mind, advertisers have no loyalty, they will go where their target audience goes.  Intelligence is only valuable as long as it is up to date.  The ball is in the social media platform owners court and they need to make a decision regarding censorship soon.